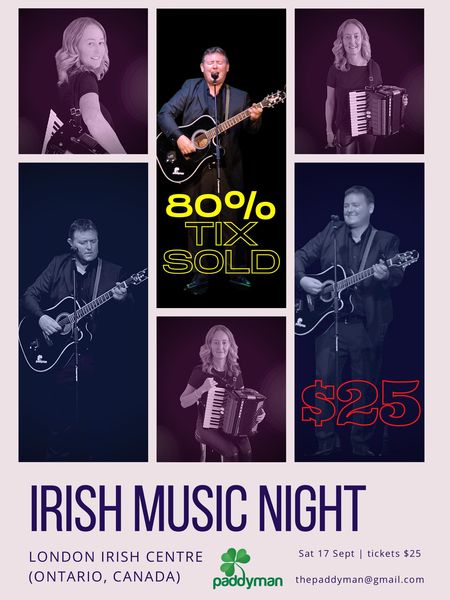 I am delighted to say that there has been a VERY positive reaction to this Saturday’s gig for the London Irish Canadian Cultural Society! It will be my first “official” gig with Geraldine MacWilliams!
Geraldine MacWilliams is a member of the talented QUINN FAMILY of musicians who, in 2018, were inducted into the Canada East Hall of Fame for Irish Music (Comhaltas).
Geraldine was born in Belfast, Ireland and moved with her family to Canada in the 1970’s. She started playing piano accordion aged 11 and has won many awards for performing Irish music. She was nominated to represent Canada at the All Ireland Fleadh on a few occasions. She has been described as “a gifted musician who did her 10,000 hours of practice at live music sessions all over Canada!” Geraldine’s father (Dessie) currently resides in Nova Scotia so she has a special place in her heart for East coast music!
Geraldine currently resides in Hamilton where she co-hosts a weekly Folk & Irish Trad Music session at the Corktown pub. Between gigs and raising a family, she also loves learning new tunes and songs! She is a performer well worth coming out to hear!
We may also have some other trad musician friends join us on stage towards the end of the gig! I can’t wait for this one!!
A few tickets are still available here:
Grab your tickets here: https://www.eventbrite.ca/…/12-way-to-paddys-day-grand…