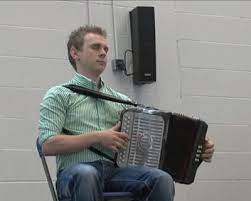 Michael Curran is a distinguished button accordion player from Fivemiletown, Co. Tyrone. He has won numerous accolades at provincial and national level, including the highly coveted All Ireland Senior Button Accordion title in 2014. Michael is frequently sought after for sessions, concerts, workshops and adjudicating throughout Ireland and the UK. He has completed tours of Ireland, Britain and America with Comhaltas, as well as travelling and performing extensively in many places around Europe and the US. With a unique Ulster style of playing, Michael is highly regarded among his peers. He is also a member of the award-winning Blackwater Céilí Band, a talented group of musicians from the South Ulster region who have been a dominant force on the céilí band scene in recent years, and were crowned All Ireland Senior Céilí Band champions in 2018.

To register, send your name and branch name to murphyroche@gmail.com.